We know the format of the Plan Charges Summary tables in the reports you download from Genovo has been bugging some of our users, and we've been racking our brains for a solution to this for a little while now.

Historically, Genovo has rendered Plan Charges Summary tables horizontally, and each column has been automatically allocated an equal width as demonstrated below.

So far so good. However, when you have lots of fields in a table, the column width isn’t always wide enough to display certain longer words in full, and the word leaches over two rows which clearly doesn’t look very good and takes time to reformat.

We've flipped the Plan Charges Summary tables so they get rendered vertically rather than horizontally, which means the above table will now look like this when the report is downloaded to Word. Note the lack of leaching! 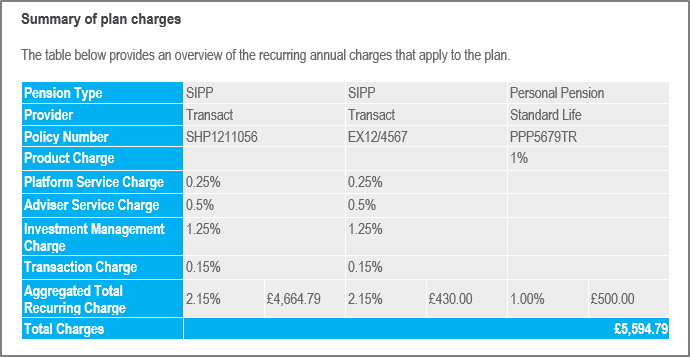 The changes have been applied as standard across all plan charges tables. However, should you decide that you'd like to revert back and prefer some (or all) your plan charges tables to render horizontally (as they did before) then we have also come up with a solution to facilitate this.

You've probably noticed tags like {PRV_ChargesTable} dotted around certain snippets in the Report Content Manager. These act as place markers and are used to render the plan summary tables (amongst other things) in your report when it's downloaded to Word.

If you wish to use some, or all of the alternative tags in your own account you will need to create a custom version of the snippet and replace the standard tag with its corresponding alternative tag, just as you would if you were customising any other content within your report template.

Did you find it helpful? Yes No

Send feedback
Sorry we couldn't be helpful. Help us improve this article with your feedback.